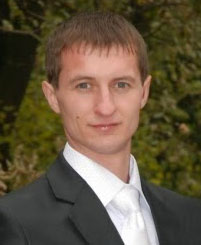 Abramov Roman Viktorovych is a serviceman of the 30th Separate Guards Novograd-Volyn Rivne Mechanized Brigade of the Land Forces of the Armed Forces of Ukraine, a soldier.

He was born on August 16, 1986 in the village of Mali Gadomtsi, Berdychiv district, Zhytomyr region. He graduated from secondary school № 7 in Berdychiv, in 2006 - Berdychiv College of Industry, Economics and Law.

In the spring of 2014, he participated in the Anti-Terrorist Operation in eastern Ukraine.

On July 31, 2014, soldier Abramov was killed during a shelling of Ukrainian military positions near the Savur-Mohyla mound in the Shakhtarsk district of the Donetsk region.

He was buried on August 3, 2014 in the city cemetery of Berdychiv.

On August 22, 2014, in Berdychiv, a memorial plaque was established to him at the house (26 Chervona Street) where Roman Abramov lived.

On June 25, 2015, during the 66th session of the Berdychiv City Council, a decision was made to rename the 60th Anniversary of the USSR Street to Roman Abramov Street.

The wife and two sons are left.