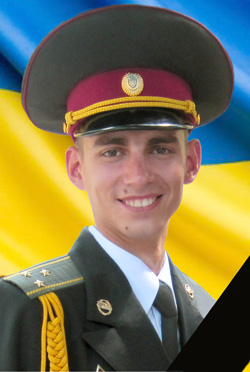 Abramovich Artem Vladimirovich was the commander of a tank platoon of the 3rd Tank Battalion tank company 30th separate Guards Novograd Volyn, Rivne mechanized brigade of the Army of the Armed Forces of Ukraine, Lieutenant.

Since 2007, he was in the Armed Forces of Ukraine. In 2011 he graduated the Hetman Sahaidachny Army Academy (city of Lviv).

On August 12, 2014 Lieutenant Abramovich was killed in battle near the village of urban Nikiforov Snizhnyans‘ka city council of Donetsk region. Tank T-64, commanded by Lieutenant Abramovich, covering the retreat of wounded military checkpoint, entered into an unequal battle with Russian tanks. During the battle, the tank lieutenant Abramovich made the ram of the Russian T-72 tanks, which moved to it at breakneck speed. As a result of the collision detonator ammunition Ukrainian dance crew who, since then, was considered missing. Only 9 months after the battle, Artem Abramovich remains were identified through DNA examination.

On September 14, 2015 in Zhytomyr on the facade of the building ecological lyceum №24 (street Shevchenko, 105B), where Artem Abramovich studied, the memorial plaque was established.

The parents, the wife and the daughter remain.