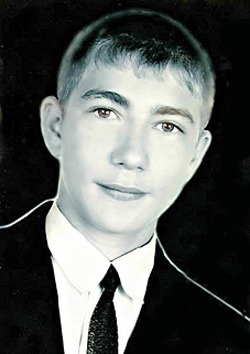 He was born on 28 July, 1992 in Pavlograd Dnipropetrovsk region. In 2007 he graduated 9 classes of secondary school №11 city of Pavlograd, in 2010 - the West Donbass professional lyceum (city Pavlograd), specialty "Electrician for repair and maintenance of electrical equipment."

From autumn 2012 to autumn 2013 he passed the military service in the Armed Forces of Ukraine. He served in the 169 Guards training center Land Forces of Ukraine (military unit A0665, urban village Desna Kozelets district, Chernihiv region). After demobilization he worked as a security guard in the trade network "ATB" in Pavlograd.

On 12 October, 2015 in Pavlograd on the facade of the building of the West Donbass professional lyceum (street Dnipro, 571) the memorial plaque was estrablished in honor four alumni, who died in the area of counter-terrorist operations, including the name of Abrosimov Andriy.

On 23 May, 2016 near the village Zolotiy Kolodyaz‘, Dobropolye district, Donetsk region on the former checkpoint outdoor memorial sign in honor of three dead soldiers 93 th Mechanized Brigade, including the name of the senior soldier Abrosimov Andriy.