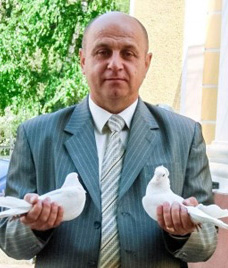 Aksenyn Vasyl Stepanovich was the social activist, a participant of Euromaidan.

He was born on February 4, 1962 in the village Lytyachi Zalischyky district, Ternopil region. He finished 8 classes of Lytyachivskoyi secondary school. After high school, my mother moved to the city of Chernivtsi.

He worked as an engineer at the "meter" in Chernivtsi, later he was engaged in private business.

In winter 2013-2014 years he regularly visited the Independence Square in Kiev, where he was active in the Revolution of dignity.

On February 19, 2014 he went from Chernivtsi to Kyiv. He was seriously determined, he should be there, where the hardest is , where it may need his help.

On February 20, 2014 during a confrontation on the street Institutska Basil Aksenyn he received the heavy gunshot wound. He did not save even the fact that he had the flak jacket. Sniper bullet was hitting the left side and passing through the stomach, damaged hip bone and tore a huge wound the size of a human fist. Sworn brothers picked up the wounded; under the bullets he was pierced on the shield and was carried out under fire.

Vasil Aksenyn was hospitalized to one of the hospitals of Kiev in late February 2014 he was admitted for treatment in the clinic of Rzeszow (Poland), where he was delivered by plane. His injuries were too severe. He underwent several hours of complicated surgery. For a long time the wound would not heal. Fueling the body can be done only through the intravenous and feeding through a tube. In March 12, 2014 Aksenyn Vasil died in a Polish hospital due to cardiac arrest, exhausted serious injuries and transferred complicated operations.

On March 15, 2014 he was buried in the Walk of Fame central city cemetery in Chernivtsi.

The President of Ukraine Decree №890 / 2014 of 21 November 2014 for the civic courage, patriotism, heroic defending constitutional principles of democracy, human rights and freedoms, selfless service to the Ukrainian people identified during the Revolution of dignity, Aksenynu Vasily Stepanovich was posthumously awarded the title Hero of Ukraine with Order "Gold Star".

The street in the city of Chernivtsi was named after him.