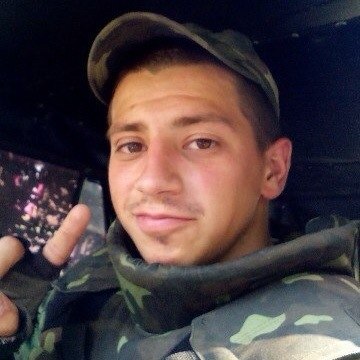 Aldoshyn Maksim Aleksandrovich was the driver of the gunner protection platoon patrol Nikolaev zonal department of Military Police of the Armed Forces of Ukraine, soldier.

He was born on June 17, 1991 in the city of Mykolaiv. He graduated high school №41, then - Nicholas Polytechnic College.

And he had the contract military service by contract in Nikolaev zonal department of Military Police of the Armed Forces of Ukraine.

Since July 2014 he took part in the anti-terrorist operation in eastern Ukraine.

On August 7, 2014 near the city of Lugansk, a machine, which he ran, fell into an ambush of terrorists. Despite serious injuries, serviceman threw the steering wheel and was able to bring the car to safety, saving the lives of their two colleagues who also were in the car. As a result of severe injuries Aldoshyn soldier died in the military hospital.

On August 10, 2014 he was buried in the cemetery Balabanivskomu city of Mykolaiv.

On September 15, 2014 in Mykolaiv on the front of the house (street Nikolaev, 24) memorial plague was established, where Maxim Aldoshyn lived.

On October 3, 2014 in Nikolaev Nikolaev near the Polytechnic College (Nikolskaya Street, 11), where Maxim Aldoshyn studied, for his memory it was laid the alley and the memorial sign.