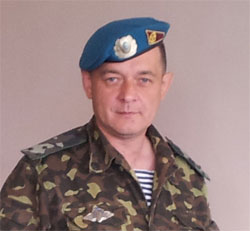 He was born in April 14, 1970 in Sinelnikove, Dnepropetrovsk (now - Dnipro) region. In 1987 he graduated the secondary school №2 city Synelnykove.

Since 1987, he was the Armed Forces of the Soviet Union. In 1991 he graduated the Faculty of Dnipropetrovsk command higher Artillery Command College. From 1991 to 1993 he served in the Air Defence Force (military unit 92851, the city Berezovsky, Sverdlovsk region of the Russian Federation). Later he lived in Kryvyi Rih, Dnipro region.

In June 14, 2014 around 1:00 am, military transport aircraft IL-76 MD Air Forces of Ukraine, during the approach to the airfield Lugansk city, was hit by terrorists of portable anti-aircraft missile system. The plane had 40 soldiers of the 25 th separate Dnepropetrovsk Airborne Brigade, including Lt. Altunin and 9 crew members. As a result of the disaster, the entire personnel of troops and aircrew were killed.

In October 15, 2014 in Kriviy Rig on the house (street Meleshkina, 35A), where Valery Altunin lived and 3 December 2014 in Synelnykove on the facade of the building of secondary school №2, where Valeriy Altunin studied, the memorial plaque was established.