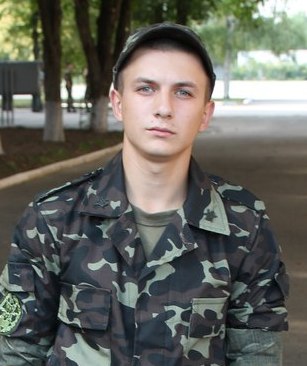 He was born on April 8, 1994 in Sumy. He graduated the Sumy secondary school, then – the professional technical school.

In 2012-2013 he passed the military service in the Armed Forces of Ukraine.

From 2013 he worked as a mechanic in the shop granular superphosphate PJSC "Sumykhimprom" city of Sumy.

From 2013 he studied at the correspondence education in the speciality "Engineering mechanics" in the center part-time, distance and evening forms of education of SSU.

In March 2014 he was mobilized into the Armed Forces of Ukraine. He served in the 9th artillery battery 3rd reactive artillery battalion 27th artillery regiment jet Land Force of Ukraine (now - the 27th Artillery Brigade, a military unit A1476, the city of Sumy).

On September 3, 2014 near the village of Pobeda Novoaydarsky district, Luhansk region,from the Russian Federation it was fired from the MLRS "Smerch" to the base camp of 27th reactive artillery regiment. The shelling killed 15 soldiers, including Ruslan Andhra.