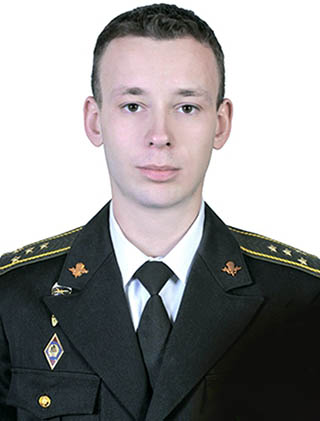 Andreyenko Kirill Leonіdovich was the commander of Special Purpose 1st special unit of the 3rd separate regiment of the Main Directorate of the Defense Intelligence of Ukraine, Captain.

Since 2007, he was in the Armed Forces of Ukraine. In 2011 he graduated with honors and reconnaissance airborne troops of Hetman Sahaidachny Army Academy, speciality "Management actions military intelligence units and special."

Since 2011 he served in the 3rd separate regiment of the Main Directorate of the Defense Intelligence of Ukraine (military unit A0680, Kirovograd).

In 2013, a team of 3rd separate regiment of special purpose, which included Captain Andreyenko, won a bronze medal at the international competition «Cambrian Patrol 2013", held among intelligence groups special forces at the 160th Wales Brigade of the Armed Forces of the United Kingdom.

On July 29, 2014 near the village Latysheva, Shakhtarsky district, Donetsk region, during search operations pilot downed Ukrainian Su-25 reconnaissance group, which included the captain Andreyenko, fell into an ambush. During the prompt of group to escape encirclement, 11 soldiers were killed, among them Cyril Andreyenko was.

On August 7, 2014 he was buried on the honorary burial №76 Lychakiv cemetery Lviv.

On February 17, 2015 in Dnepropetrovsk on the facade of the building of secondary school №34 (street Kedrina Dmitry, 57), where Kyrill Andreyenko studied, there was established the memorial plaque.

He was awarded the Order of Bogdan Khmelnitsky III degree (14/11/2014, posthumously).