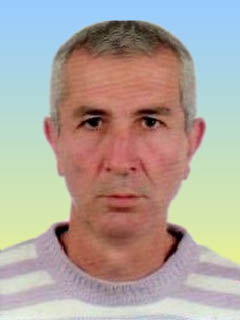 Harutyunyan Georhiy Vagarshakovich was the social activist, a participant of Euromaidan.He was born on July 4, 1960 in Batumi (Adjara Autonomous Republic today, Georgia). He was Armenian.

He was a citizen of Georgia. He moved up permanent residence in the city of Rivne. Firstly he received a residence permit and later the citizenship of Ukraine. He went to work abroad. He was actively engaged in social activities. He was involved in the work of the Rivne, the regional organization of the All-Ukrainian Union "Freedom" for several years, worked in a tent in "Freedom" and held the active propaganda work, always attended all nationwide patriotic actions and measures.

In winter 2013-2014 years he was in Independence Square in Kiev, where he was an active participant in the Revolution of dignity. He was on the Euromaidan from the very beginning. He had a Name "Caucasus". In opposition to the "titushky" he was broken his hand, but he returned to the barricades. The last time he came to the Maidan in February 17, 2014.

From 9 to 20 February, 2014 during a confrontation at Independence Square Georhiy Harutyunyan helped the wounded activists, brought the bodies of counterparts. When he came to the wounded boy near the Monument of Independence and he was seriously wounded by sniper (bullet entered the left side of the neck and came out through his right shoulder). The activist, who was nearby, brought the wounded at the hands to the doctors at St. Michael‘s Cathedral. But the prompt to save the life of George Harutyunyan failed, he died because of the large blood loss.

According to the President of Ukraine Decree №890 / 2014 of 21 November 2014 for the civic courage, patriotism, heroic defending constitutional principles of democracy, human rights and freedoms, selfless service to the Ukrainian people identified during the Revolution of dignity Harutyunyan George was posthumously awarded the title Hero of Ukraine and the Order with "Gold Star".