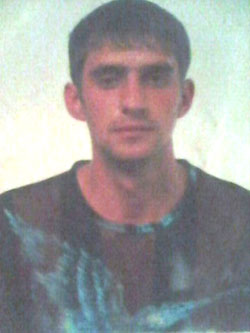 Barbukh Petro Petrovych was the gunner of the tank platoon of the 3rd Panzer Company of the tank battalion of the 30th Guards Navy-Navy Rivne Mechanized Brigade of the Land Forces of the Armed Forces of Ukraine, a soldier.

In March 2014, he was mobilized into the armed forces of Ukraine. Served in the 30th individual Guards Naval-Volyn Rivne Mechanized Brigade of the Land Forces of the Armed Forces of Ukraine (military unit A0409, the city Novograd-Volynsk, Zhytomyr region).

On 12 August, 2014, soldier Barbukh died in a battle near the town Nikiforov, Snizhnyansky city council, Donetsk region. Tank T-64, whose crew (the tank commander - Senior Lieutenant Abramovych, gunner - Soldier Barbukh, mechanic driver - Sergeant Antoniuk), covered the departure of the wounded troops from the checkpoint, engaging in an unequal battle with Russian tanks. During the battle, the tank of the senior lieutenant Abramovych carried out the tire of the Russian tank T-72, which was moving at him at a crazy speed. As a result of the crash, a detonated bomber of the Ukrainian tank, whose crew, since then, was considered to be missing. Only after a long time after the battle, the remnants of Barbukh‘s soldier were identified through the DNA testing.

On 5 March, 2015 he was buried in the cemetery of the village Zherebilivka, Novograd-Volynsk district.

On 28 May, 2015, in the village Pischiv, Novograd-Volynsk district, on the facade of the building of the secondary school ( Mira Street,18), where Peter Barbukh studied, the memorial plaque was established.

The parents, the wife and the daughter are left.