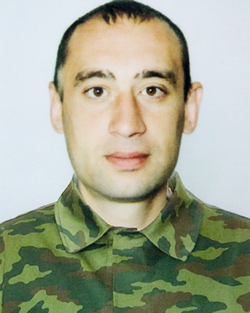 Bashyrov Takhir Takhirovych was a serviceman of the 1 st Guards Tank Brigade of the Land Forces of the Armed Forces of Ukraine, a soldier.

He was born on 25 February, 1985 in the city Nizhyn, Chernihiv region. He graduated the 9th form of general school №15 in the city Nizhyn in 2001 and the Nizhyn Professional Agricultural Lyceum in the field of "tractor driver-machinist".

After the army he worked in Kiev and Nizhyn.

From autumn-winter 2014, he participated in the anti-terrorist operation in eastern Ukraine.

On 29 January, 2015, he was buried in the cemetery Gunky, near the city Nizhyn, Chernihiv region.

The parents, the sister, the wife, the son and the daughter are left.

In 2015, in the city Nizhyn, the memorial plaque was established on the building of the general school №15 (street Ozyazhaya, 123), where Bashyrov studied.