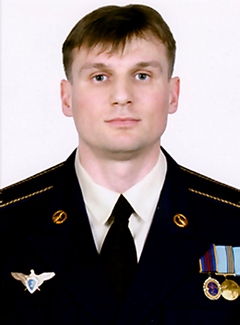 Bely Alexander Ivanovich was the deputy of the commander of the aviation squadron of 25 Guards military transport aviation brigade of the Air Forces of Ukraine, military airman first class, lieutenant colonel.

Since 1993, he was in the Armed Forces of Ukraine. In 1997 he graduated the Kharkov Institute of pilots of the Air Force (now - Kharkiv Air Force University named after Ivan Kozhedub). Military service was held in the 947 th Bomber Aviation Regiment Sevastopol Military Air Forces of Ukraine (military unit 15558 (A 1408), the city of Dubno Rivne region). After the disbandment 947 th Bomber Aviation Regiment Sevastopol in 2001, he continued to serve as a part of 25th Guards military transport aviation brigade of the Air Force of Ukraine (military unit A3840, Melitopol, Zaporizhya region).

In May 2008, Alexander Bely was the member of the crew military transport aircraft IL-76 Air Force of Ukraine, which performed the task of transporting humanitarian aid to the affected areas by the earthquake in Sichuan province of China. During the given transaction there were delivered 25 tons of humanitarian aid, such as tents, blankets, medicines, medical and special equipment.

In June 14, 2014 around 1:00 am, military transport aircraft IL-76 MD Air Forces of Ukraine, during the approach to the airfield Lugansk city, was hit by terrorists of portable anti-aircraft missile system. The plane had 40 soldiers of the 25 th separate Dnepropetrovsk Airborne Brigade and 9 crew members, including the Lieutenant Colonel Bely. As a result of the disaster, the entire personnel of troops and aircrew were killed.

In June 12, 2015 in Melitopol on the territory of the military unit A3840 there was opened the memorial of the crew Il-76 MD, including the name of the Lieutenant colonel Bely.