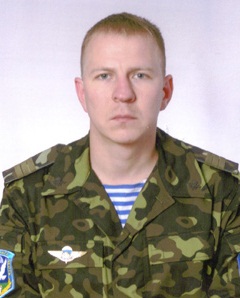 Bilokurov Oleksandr Serhiyovych was the squad of the Engineer Platoon Engineer company of the 95th separate airborne brigade of highly mobile airborne troops of the Armed Forces of Ukraine, Sgt.

He was born on 4 June, 1985 in the city of Chita, Russian Soviet Federative Socialist Republic (now - Transbaikalia edge of). In 2002 he graduated the secondary school № 8 cities Chernihiv, 2007 - Faculty of Distance Learning and Distance Luhansk University of Internal Affairs (2014 University temporarily suspended activities). He served in the Internal Affairs of Ukraine in 2010-2013, he worked in banking institutions in Kyiv.

Since September 2013 he had the military service under contract to the 95th separate airborne brigade of highly mobile airborne troops of the Armed Forces of Ukraine (military unit A0281 Town Zhytomyr).

On 26 January, 2015 sergeant Bilokurovwas killed when an engagement to evacuate wounded soldiers was from the battlefield, when his unit came under mortar attack near the village of Spartak Yasinovatskiy Donetsk region near the International airport "Donetsk".

On 30 January 2015 he was buried in the cemetery "Yatsevo" in Chernihiv.