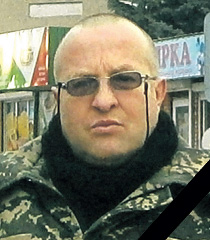 Bortutskyy Yuriy Ivanovich was the serviceman of the 4th separate motorized infantry battalion of the 128th separate mountain-infantry brigade of the Land Forces of the Armed Forces of Ukraine, a soldier.

Since 2014 he participated in the anti-terrorist operation in eastern Ukraine. Nine service, including the protection of objects, in the cities Mariupol, Kramatorsk, Artemivsk (now - Bakhmut), Donetsk region.

On 14 May, 2015 soldier Borbuts‘kyy died as a result of an accident during a ferry crossing the Seversky Donets River near the city Krasniy Liman (now Lyman), Donetsk region.

On 20 May, 2015, he was buried in the cemetery of the village Nove Selo, Yarmolinetsi district, Khmelnytskiy region.

The father, the brothers, the daughter and the son are left.

In May 2016, in the village Nove Selo, on the facade of the building of a comprehensive school (Shkilna Street , 1a), where Yuriy Borbuts‘kyy studied, the memorial plaque was established.