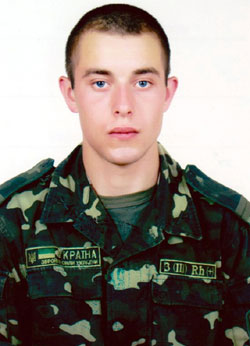 He was born in September 30, 1993 in Swan Sumy region. In 2008 he graduated from secondary school №5 Swan city, and in 2011 – Lebedinsk higher vocational school of forestry Lebedin City.

In 2011, he worked as machine operators and mason LLC "Ukrtranspnevmatyka" Lebedin city.

He studied in classes at the college named after PS Malovystoropskiy Fishing Sumy National Agrarian University.

After military service he worked for some time in Lebedinsky garment factory.

On September 3, 2014 near the village of Pobeda Novoaydarsky district, Luhansk region from Russian Federation it was fired from the MLRS "Smerch" base camp 27th reactive artillery regiment. The shelling killed 15 soldiers, among them Bogdan Brysenko was.

On September 8, 2014 he was buried in the Trinity Cemetery Lebedin City.

The parents and the brother remain.