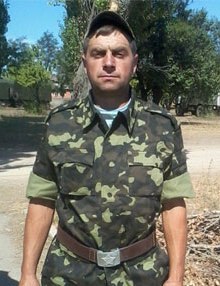 Bronyk Yuriy Mykolayovych was the mechanic-driver of the 30th separate mechanized brigade of the Land Forces of the Armed Forces of Ukraine, sergeant.

He passed the regular military service in the Armed Forces of the USSR / Ukraine.

For 22 years, he worked as a machine tool-cutter in the Ushumirsk timber industry complex of the State Enterprise "Korostenskoe Timber Forestry Enterprise".

During the service in the area of the antiterrorist operation, Sergeant Bronyk was injured. He was treated at the hospital of the Cherkasy city settlement, Novomoskovsk district, Dnipropetrovsk region, where he died of injuries sustained on 8 November, 2014.

On 11 November, 2014 he was buried in the cemetery of the village Ushomir, Korosten district, Zhytomyr region.

The wife and two sons are left.

In May 2015, in the village Ushumir, a memorial plaque was established on the building of the gymnasium (Raca Street, 7), where Yuriy Bronik studied.