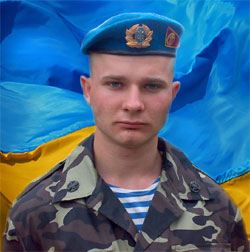 Burko Evgen Volodymyrovych was the deputy of the commander of the reconnaissance group of special purpose company Special purpose special unit of the 3rd separate regiment of special purpose Special Forces of the Army of the Armed Forces of Ukraine, Sergeant. He was born in July 8, 1991 in the village free of Kirovograd area, Kirovograd region. He finished the secondary school in the village free of Kirovograd region. In 2008-2009 he passed the military service, and since 2009 he served under contract in the 3rd regiment of special purpose Special Forces of Land Forces of Ukraine (military unit A0680, Kirovograd). In the spring of 2014 he took part in the anti-terrorist operation in eastern Ukraine. On June 12, 2014 in the village Stepanovka, Shakhtarsk district, Donetsk region on a reconnaissance patrol, which was moving far ahead of column technology, there was an attack of the subversive and terrorist group. During the battle Burko sergeant was wounded, but continued to fire in response, the hand began to refuse acting. Comrades of Evgen Burko understood that he was wounded and began to pull him from the battlefield. Once they reached a safe place, tried to save the life of a friend, but all attempts were in vain. The bullet came under enemy bullet-proof vest, and then Evgen started internal bleeding, which caused the death. On June 16, 2014 he was buried in the cemetery of the village free of Kirovograd district, Kirovograd region. He was awarded the Order "For courage" of III degree (19.7.2014, posthumously). On September 18, 2014 in the village free of Kirovograd area in front of the building of secondary school Kirov (Lenin Street, 28), where he studied Eugene Burko, the memorial plaque was established.

The pregnant wife and the daughter remain.