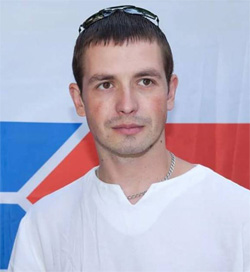 Cherkashyn Oleksandr Mykolayovych was the fighter of the tactical group "Belarus", 1st assault company of the 5th separate battalion of the Volunteer Ukrainian Corps "Right Sector".

He was born on 27 September, 1982 in the city of Brest (Belarus). Belorussian. He graduated the high school in the city of Brest. In childhood and adolescense he was seriously involved in sports. After graduating from school he entered the sports academy in Minsk, but he did not have one ball for the competition.

He studied at the Tauride Christian Institute in the city Kherson.

In 2014, volunteers entered the Volunteer Ukrainian Corps "Right Sector", was a fighter of the tactical group "Belarus", the 1st assault company of the 5th separate battalion, serving as the Chaplain.

On 10 August, 2015, the soldier Cherkashyn received the severe fragmentary wounds of the breasts, kidneys and heads in the battle near the village Bela Kamyanka, Telmaniv (now - Boykivsky) district, Donetsk region.

The volunteer was taken to the Zaporozhya hospital for treatment. At first, Olexandr Cherkashyn was connected to the device of the artificial respiration, then the sepsis began and he fell into a coma. The volunteer has undergone the several operations. Doctors fought for his life, but their efforts proved to be useless. On 28 August, 2015, Olexandr Cherkashyn died of injuries.

On 3 September, 2015, he was buried in the cemetery of the village Kamenitsa-Zhivoretskaya, Brest district, Brest region (Belarus).

On 28 March, 2016, a monument to the Belarusians who died for Ukraine (dedicated to the Belarusians, who died during the events of EuroMaidan and during the anti-terrorist operation in the east of Ukraine), was opened on the building of the Kyiv National University of Technology and Design (22, Belarusian street, 22). among which there was the name of Olexandr Cherkashyn.


DEDICATED MONUMENTS:
Monument to the Fallen for Belarusians Ukraine
﻿