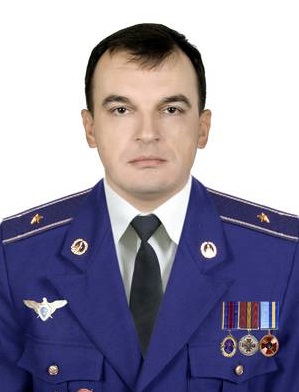 He was born in June 17, 1968 in the village of Plekhanov, Hryazynskiy district, Lipetsk region (now - the Russian Federation). In 1985 he graduated the high school №23 city of Melitopol, Zaporizhya region.

Since 1985, he was in the Armed Forces of the Soviet Union. In 1990 he graduated Kachinskiy Higher Military Aviation School of pilots of Volgograd (now - the Russian Federation). In the Armed Forces of the Soviet Union and the Armed Forces of Ukraine, Major Dyakov had military service for the following positions: a pilot - instructor, assistant captain, captain squadron aviation squadron, commander of the squadron of aircraft squadrons. Since 2008 he had military service as chief of airborne fire and tactical training of 25th Guards military transport aviation brigade of the Air Force of Ukraine (military unit A3840, Melitopol, Zaporizhya region).

In June 14, 2014 around 1:00 am, military transport aircraft IL-76 MD Air Forces of Ukraine, during the approach to the airfield Lugansk city, was hit by terrorists of portable anti-aircraft missile system. The plane had 40 soldiers of the 25 th separate Dnepropetrovsk Airborne Brigade and 9 crew members, including the Major Dyakov. As a result of the disaster, the entire personnel of troops and aircrew were killed.