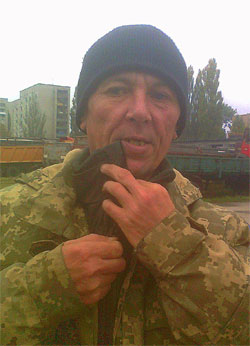 Denysov Oleksandr Volodymyrovych was a serviceman of the 53rd individual mechanized brigade of the Land Forces of the Armed Forces of Ukraine, a soldier.

He was born on 22 December, 1972 in the village Zolotnyky, Terebovlyansk district, Ternopil region. He graduated the high school.

He participated in the antiterrorist operation in eastern Ukraine.

On 14 January, 2016, soldier Denisov died while serving in the Dnipropetrovsk region.

On 24 January, 2016, he was buried in the cemetery of the village Zolotnyky, Terebovlyansk district, Ternopil region.

Three sisters and the nephew are left.