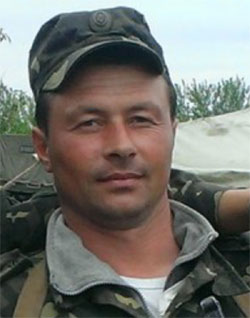 Derylo Andriy Borysovych was the gunner of the mechanized compartment 93 th Separate Guards Mechanized Brigade Army of the Armed Forces of Ukraine, Sergeant.

He was born on 22 October, 1977 in the village Vydvyzhenets (2016 - Myrolyubivka) Novomoskovsk district, Dnepropetrovsk region. He graduated the secondary school Vydvyzhenets village.

In 1995-1997 he passed the military service in the Armed Forces of Ukraine.After demobilization he returned to Vydvyzhenets. He worked as a driver in his native village.

On May 23, 2014 Sergeant Derylo carried his duty at the checkpoint near the village of Zolotyy Kolodyaz‘, Dobropolye district, Donetsk region on the track Dobropole - Kramatorsk. At this time the terrorists approached the checkpoint on cars of Ukrainian patrol. Using preference surprise militants threw several grenades and opened fire on the checkpoint tight. Senior Sergeant Derylo opened fire in response, giving their colleagues time to regroup and start a counterattack in response. During the battle, he received two injuries: one simple blind injured skull and brain injuries and gunshot neck injury. Despite the injury, he continued to fire until he lost consciousness from his wounds. Then he tried to finish off their feet, so that his ribs was broken, internal organs are reflected, all vertebrae were broken on the spine from the shoulder, from blades to the base of the skull.

After the battle, Sergeant Derylo first evacuated to Kharkiv, then in Kyiv. He was connected to the apparatus of artificial life support in the Kiev hospital. On 9 June, 2014, he died of his wounds.

He was buried in the cemetery of the village Myrolyubivka, Novomoskovsk district, Dnepropetrovsk region.

The wife, two children, parents and sister are left.

On 23 May, 2016 near the village Zolotyy Kolodyaz‘, Dobropolye district, Donetsk region on the former checkpoint outdoor memorial sign in honor of three dead soldiers of 93 th Mechanized Brigade, including the name of Sergeant Andriy Derylo.