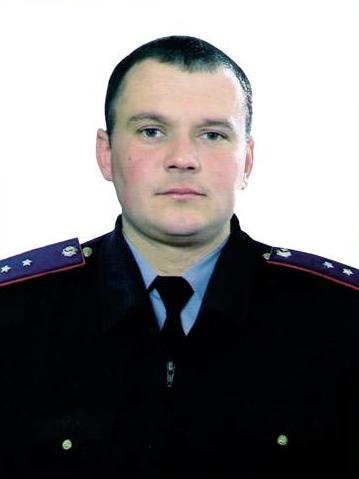 He was born on 8 April , 1980 in the village of Nuzhniy Olchedayiv, Mogilev-Podolsk district,Vinnytsia region. He graduated the secondary school, then - Higher professional school №11 of Vinnytsia.

Since 2000, he had the military service under contract in a separate regiment of special purpose "Jaguar" Internal Troops of Ukraine (March 2014 - 8th Regiment prompt appointment of the Western Operational and territorial unification Ukraine National Guard, a military unit 3028 of Kalinovka, Vinnytsia region).

On 5 May 2014 Ensign Dolins‘kyy was killed in the attack of Russian terrorist gang to the column of Ukrainian military vehicles near the town Slovyansk, Donetsk region.

On 7 May 2014 he was buried in the cemetery of the village Nuzhniy Olchedayiv, Mogilev-Podolsk district.

In the city of Kyiv at Solomenska area on one of the panels of the memorial to the fallen workers of the Ministry of Internal Affairs of Ukraine the name of ensign Dolins‘kyy Viktor was engraved.

On 5 May, 2016 in Vinnytsia on the facade of the building of the Higher Vocational School №11 (Nemyriv highway, 78), where Dolins‘kyy Viktor studied, the memorial plaque was established.