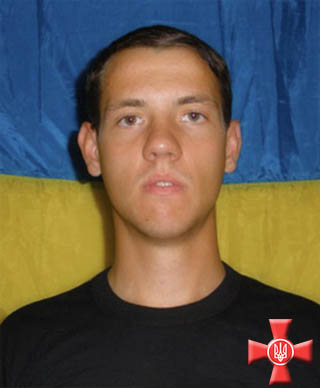 Yevdokymenko Ivan Mykolajovych was the scout of 1st platoon of the reconnaissance company of 81 th separate airborne brigade of highly mobile airborne troops of the Armed Forces of Ukraine, soldier.

After college he worked for some time at PLC Fastovsky chemical engineering factory "Red October" Fastow city. From February to July 2014 he worked as an electrician in JSC "Bakery Shostka" Shostka.

On January 19, 2015 during a combat mission near the international airport "Donetsk" the group of men, which included Yevdokymenko soldier, was caught in an ambush and took a fight with Russian mercenaries. During the battle, despite the injuries John Yevdokymenko didn‘t put the weapons from the hands and till the last moment he defended the retreat of his comrades.

Till April 2015 he was registered in the list of missing persons, after examination of DNA it was determined that he was buried as unknown soldiers in the city of Dnipropetrovsk.

On May 15, 2015 he was reburied in the cemetery of Artemivsk district of Shostka town.

On October 13, 2015 in Shostka on the facade of buildings of the secondary school №5 (Marat Street, 24A) and Ivan Kozhedub Chemical Engineering College ( Institutskaya Str.1), where Ivan Yevdokymenko studied, the memorial plaque was established for him.