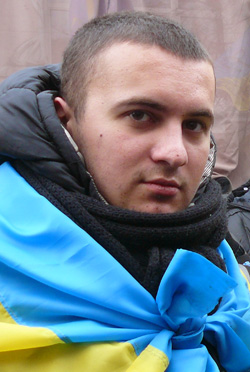 He was born in June 6, 1993 in the city of Kriviy Rih, Dnepropetrovsk region. In 2008 he graduated 9 classes of secondary school №57 city of Kryvyi Rih, in 2011 - Kriviy Rih Government Business and Economics College, specialty "Organization of service in institutions restaurant industry and trade."

He was commander self-defense of Kryviy Rih Maydan and of Ingulskaya Palanca of Ukrainian Cossacks.

In June 14, 2014 around 1:00 am, military transport aircraft IL-76 MD Air Forces of Ukraine, during the approach to the airfield Lugansk city, was hit by terrorists of portable anti-aircraft missile system. The plane had 40 soldiers of the 25 th Dnepropetrovsk separate airborne brigade, including soldier Haiduk and 9 crew members. As a result of the disaster, the entire personnel of troops and aircrew were killed.

In November 5, 2014 in Kriviy Rog, in front of the building of state commercial and economic college (Kuznetsova street, 41), where Ilya Hayduk studied, the memorial plaque was established.

He was awarded the Order “For courage” of III degree (20.6.2014, posthumously) and honors the city Kriviy Rih "for services to the city" third degree (posthumously).