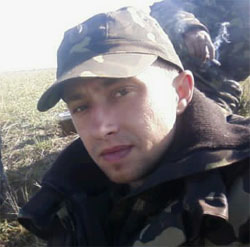 He was born on September 22, 1990 in the village of Kuibyshev, Zaporozhye region. In 2006 he graduated 9 classes of specialized secondary school "Intellect" urban villages Kuibyshev, 2009 - Kuibyshev agricultural professional lyceum.

After serving some time he worked on the production association "Motor Sich" city of Zaporozhye.

On July 11, 2014 near the village Zelenopillya Sverdlovsk district, Luhansk region around 4:30 am n-terrorist groups fired from the MLRS "Grad" to the checkpoint of Ukrainian military shelling 19 soldiers of Iron 24th separate mechanized brigade and 9 soldiers 79th separate airborne brigade were killed, among them Vladimir Hnatusha was . Only 4 weeks after the attack, the body of Vladimir was identified through DNA examination.

On August 7, 2014 he was buried at the Central Cemetery of Kuibyshev.

His father and three sisters remain.