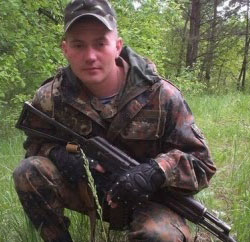 He was born on July 16, 1991 in the city of Kharkiv region Izum. He graduated the high school №1 of Izum.

Since 2011, he studied the faculty of radio air defense Kharkiv Air Force University named after Ivan Kozhedub on part-time basis.

Since April 2013 he had the military service under contract in 25 separate Dnepropetrovsk Airborne Brigade highly mobile airborne troops of the Armed Forces of Ukraine (military unit A1126; urban village Guards Novomoskovsk rayon).

On June 14, 2014 around 1:00 am, military transport aircraft IL-76 MD Air Forces of Ukraine, during the approach to the airfield Lugansk city, he was hit by terrorists of portable anti-aircraft missile system. The plane‘s been 40 soldiers of the 25 th separate Dnepropetrovsk Airborne Brigade, including Junior Sergeant Goncharenko and 9 crew members. As a result of the disaster, the entire personnel of troops and aircrew were killed.

On July 27, 2014 he was buried in the cemetery on the street Shakespeare Izum City.

On January 30, 2015 at the session of Izyum City Council decided to rename from the street Artem alley to the name of junior sergeant Sergei Goncharenko.

In the city Izum on the facade of the building gymnasium №1 (Cathedral Street, 1), where he studied Sergey Goncharenko, the memorial plaque was established. He was awarded the Order "For courage" of III degree (20.6.2014, posthumously).