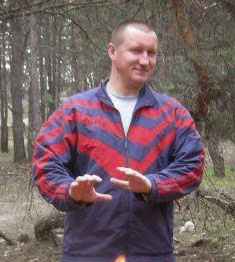 Grabovoy Valery Mikolayovich was the deputy of battery commander to work with the staff of the 25-th separate Dnepropetrovsk Airborne Brigade highly mobile airborne troops of the Armed Forces of Ukraine, Lieutenant.

He was born in August 15, 1969 in Kotovsk (now - Podolsk) Odessa region. He graduated the secondary school of village Banduriv, Haivoronsk district, Kirovograd region.

Since 1987 he was the Border Troops of USSR KGB. In 1991 he graduated the command department of Alma-Ata higher boundary school KGB Dzerzhinsky (now - Academy of State Border Service of Kazakhstan CBN). In 1993 he left the service in the border troops.

In 1994-1997 he worked on contract as a lawyer of the legal department of banking to JSCB "Kazomertsbank" (the city of Almaty, Kazakhstan). In 1997 he graduated the University “Turan” (the city of Almaty, Kazakhstan), specialty "Jurisprudence". In 1998-1999 he worked as a lawyer at the JSC "Pavlograd Dairy Plant" Pavlograd Dnipropetrovsk city (now - Dnipro) region. Since 1 September 1999 he was the private entrepreneur. He lived in the village of Troitske, Pavlograd Dnepropetrovsk district (now - Dnipro) region.

In June 14, 2014 around 1:00 am, military transport aircraft IL-76 MD Air Forces of Ukraine, during the approach to the airfield Lugansk city, was hit by terrorists of the portable anti-aircraft missile system. The plane had 40 soldiers of the 25 th separate Dnepropetrovsk Airborne Brigade, including Lt. Hraboviy, and 9 crew members. As a result of the disaster, the entire personnel of troops and aircrew were killed.

He was buried in the cemetery of the village Troitske, Pavlograds‘kyy district.

In June 7, 2015 in the village Banduriv, Haivoronskyi district in front of the building of secondary school, where Valery Hraboviy studied, the memorial plaque was established.