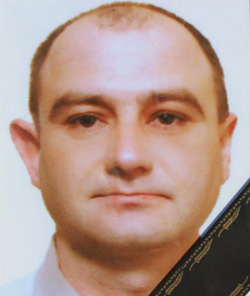 Humenyuk Oleksandr Pavlovich was a serviceman of the 40th separate artillery brigade of the Land Forces of the Armed Forces of Ukraine, junior sergeant.

In 1997-1999 he was in the regular military service in the Armed Forces of Ukraine. He served in the city of Dnipropetrovsk (now Dnipro).

After the demobilization he worked as a turner at the Open Joint Stock Company Slavutsky-Polyan Paper Mill, at the Unix enterprise in the city Netishyn, Khmelnytskiy region, in Netishyn‘s career.

Since the summer of 2015, he participated in the anti-terrorist operation in eastern Ukraine.

On 26 August 26, 2015, the junior sergeant Humenyuk died of a fatal injury as a result of a firing from the missile system of a volley fire "Grad" near the village Prokhorivka, Volnovakha district, Donetsk region, when a shell hit his dugout. Along with him 4 more soldiers died.

On September 1, 2015, he was buried in the cemetery of the village Krupets, Slavutsk district, Khmelnytskiy region.

The two daughters are left.

In February 2016, in the village Krupets, on the facade of the building of the educational complex (street Shklyna, 1), where Olexandr Humenyuk studied , the memorial plaque was established.