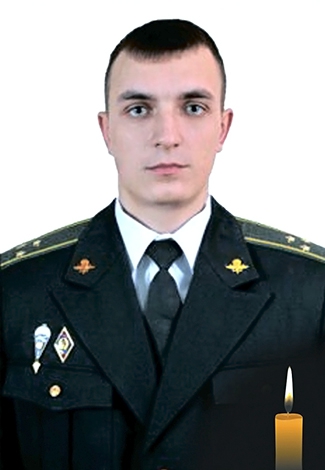 He was born in September 9, 1992 in the village of Oleksandrivka Zhashkivskyi Cherkasy region.

In 2009, Alexander graduated the secondary school in the village of Oleksandrivka Zhashkivskyi area.

From 2013 he served as commander of a platoon of snipers Snipers Company of the 95th separate airborne brigade of highly mobile airborne troops of the Armed Forces of Ukraine (military unit A0281; Zhytomyr city).

In July 19, 2014 between 9:10 to 19:00 during the antiterrorist operation consisting of assault to destroy the militants in the city Lysychansk district, Luhansk region during the fighting, Lieutenant Holo received four bullet wounds in the chest.

On July 23, 2014 at 6 am at the Military Medical Clinical Centre Northern Region (military unit A3306, Kharkiv) during surgery Igor Holo died.

On 25 July 2014 he was buried in the cemetery of the village Oleksandrivka Zhashkivskyi Cherkasy region.

On October 22, 2014 in the village of Oleksandrivka Zhashkiv area in front of the building of the Alexander secondary school (Lenin Street, 1), where Igor Holo studied , a memorial plaque was established to him.