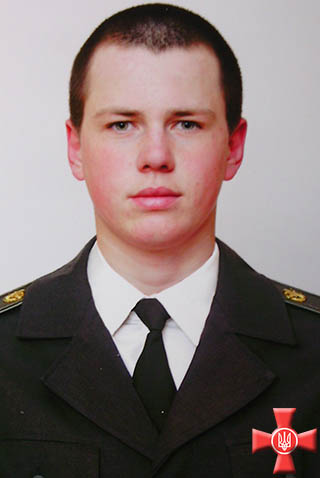 Ihnatchenko Anton was the driver of the 25-th separate Airborne Brigade highly mobile airborne troops of the Armed Forces of Ukraine, soldier.

He was born in September 14, 1995 in the city of Kriviy Rih, Dnepropetrovsk region. In 2013 he graduated the secondary school №110 city of Kriviy Rih. 8 years he was engaged in the choreographic collective "Jart" of the House of Culture of North mining plant. After school graduation he entered the law faculty of the university, but he did not have enough points.

From 2013 he served as a contract driver in 25 separate Airborne Brigade highly mobile airborne troops of the Armed Forces of Ukraine (A1126, village Hvardiyske, Novomoskovsk district).

In June 13, 2014 scout group, which the soldier Ihnatchenko was included, performed the combat mission in stripping the area from the enemy and locating enemy anti-aircraft missile system near the health resort area in the suburbs of Slavyansk, Donetsk region. From the first time the unit was ambushed by terrorists. Having spent the entire stock of ammunition and then adding it to the side, the group returned there again. Division was fired from three sides. During the battle soldier Ihnatchenko discovered the enemy calculation automatic grenade launcher. Due to the well-aimed shot from the hand grenade he destroyed enemy firing point. But terrorists have found the soldier Ihntachenko and released a grenade in response, which torn with him. He was killed on the spot - a fragment hit in the head. According to others, Ihnatchenko soldier was killed by a sniper shot to the head. His resolute and competent actions of the soldier Ihnatchenko saved the lives of his military counterparts.

In June 17, 2014 he was buried in the cemetery of "North Mining and Processing Plant" in Kriviy Rih.

In November 28, 2014 in Kriviy Rih on the building of secondary school №110 (Dovator street 31), where Anton Ihnatchenko studied, the memorial plaque was opened.

The mother and two sisters remain.