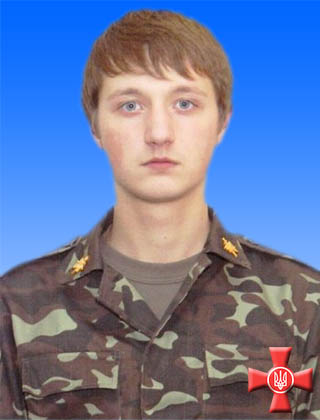 In 2012 he graduated the training of students for the program for reserve officers Sergei Korolev Zhytomyr military institute on the speciality - airmobile commander of the platoon.

In 2013 he graduated the Faculty of Accounting and Finance of Zhytomyr National Agroecological University.

In the spring of 2014 he took part in the antiterrorist operation in eastern Ukraine.

On November 29, 2014 he was seriously injured in the attack near the village of Peski Yasinovatskiy district, Donetsk region.

On November 30, 2014 at 3 o‘clock in the morning without regaining consciousness, he died of wounds in hospital in Krasnoarmeysk, Donetsk region.

On December 3, 2014 he was buried in a military cemetery in Zhitomir.

He was awarded the Order of Bogdan Khmelnitsky III degree (15.5.2015, posthumously).

On May 26, 2015 in Zhytomyr on a building facade city gymnasium №3 (Kotovskiy Str. 8),a memorial plague was established, where Dmitry Ilnytsky studied .


DEDICATED MONUMENTS:
A plaque on the facade of the building municipal gymnasium №3, where Lieutenant Ilnytskyy D.A. studied (Zhytomyr)
﻿