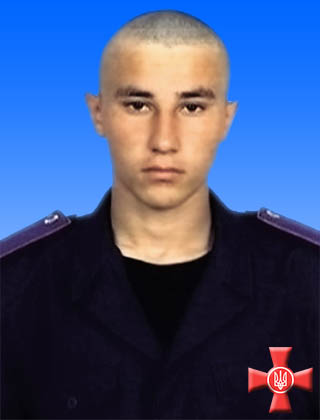 Isadchenko Vladimir Oleksandrovych was the archer of 2nd patrol company of the 1st Battalion patrol of the 16th regiment of public order of the Central Operational and Territorial Association National Guard of Ukraine, the senior soldier.

Since May 2013 he passed the military service in the Internal Troops of Ukraine (March 2014 - National Guard of Ukraine). He served as the shooter in the patrol of 2nd company of the 1st Battalion patrol of the 16th regiment of public order of the Central Operational and territorial unification Ukraine National Guard (military unit 3036, the city of Dnipropetrovsk).

He took part in the antiterrorist operation in eastern Ukraine in May 2014. He serviced at checkpoints.

On May 29, 2015 the automobile column, in which Isadchenko senior soldier was, moved toward the city of Kharkiv region Izum after delivery of food and other goods at roadblocks ,which were near the town of Slavyansk Donetsk region, due to the same transport Ukrainian soldiers returned after the service on the checkpoints.. Near the village of Kamenka, region Kharkov, region Izyum, the column caught up the car, which was located the sabotage and the reconnaissance group of separatists. When the vehicle of enemies is leveled with the last truck,in which Isadchenko senior soldier was, from it in the truck it was opened the fire from small arms and grenades. By reason of the attack a senior soldier Isadchenko was killed, two soldiers were wounded.

In Lipetsk village near the memorial to the heroes of World War II and the well on the road for Vladimir Kotovsk Isadchenko there were established the memorials. Order of the National Guard of Ukraine Volodymyr Isadchenko senior soldier forever enlisted in the list of the 16th regiment of public order, in which he served. In the barracks of the military unit plague memorial was established.

The parents and younger sister remain.