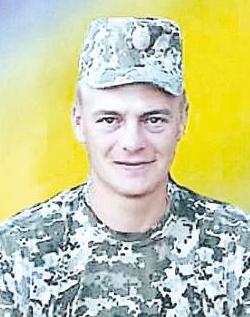 Kapelyukha Serhiy Viktorovych was the machine gunner of the 9th mechanized company of the 53rd individual mechanized brigade of the Land Forces of the Armed Forces of Ukraine, a soldier.

From 10 July, 2015, he participated in an anti-terrorist operation in eastern Ukraine.

On 13 November, 2015 soldier Kapelyukha was seriously wounded in action near village Verhnotoretske, Yasinovata district, Donetsk region of the gap bomb that he fell into his trench. The serviceman was taken to the hospital of Krasnoarmeysk (from 2016 - Pokrovsk), Donetsk region, where doctors fought for his life during 8 hours . But the efforts of doctors proved to be in vain; on 14 November, the soldier Kapelyukha died from the numerous fragile injuries and the bleeding.

On 18 November, 2015 he was buried on the Alley of Fame of the Vasinsky Cemetery in the city Znamenka.

The parents and the daughter are left.

On 10 October, 2016 in Znamenka on the building of secondary school №4 (street Primakov, 2/15), where Serhiy Kapelyukha studied, the memorial plaque was established. In 2016 After his name it was called the electric train of the series ER-9р-377 of the Znamenske Directorate of Railway Transportation, on which he worked. On 4 November, 2016 in Odessa in the territory of motor-wagon depot "Odessa - Pledge 1" (street Ovidiopol‘s‘ka Arc, 6) There was opened a memorial sign in honor of railroad workers who died in the area of anti-terrorist operations, including the name of Serhiy Kapelyukha.