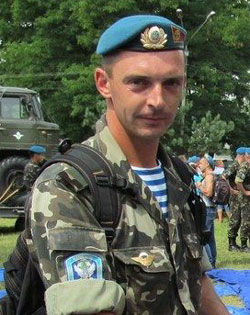 He was born in October 6, 1982 in the village Levkiv, Zhytomyr region. In 2000 he graduated the secondary school №30 of Zhitomir.

Since 2003, he had military service under contract to the 72 Separate Guards Mechanized Krasnograd-Kiev Order of Red Banner Brigade of the Land Forces of the Armed Forces of Ukraine (military unit A2167, the city White Church Kiev region).

In 2003 and 2004 he participated in UN peacekeeping missions in Iraq.

Since 2007, he had the military service under contract to the 95th separate airborne brigade of highly mobile airborne troops of the Armed Forces of Ukraine (military unit A1910; Zhytomyr city).

On April 23, 2014 he took part in the anti-terrorist operation in eastern Ukraine.

On July 28, 2014 during the battalion tactical operations to destroy a group of militants near the village arboret Shakhtarsky Donetsk region, Sergeant Knysh received shrapnel injuries incompatible with life.

On August 1, 2014 he was buried in the cemetery of the village Levkiv.