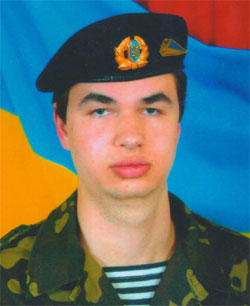 He was born in March 17, 1991 in Dnepropetrovsk (now - Dnipro). In 2009 he graduated the secondary school №118 city of Dnipropetrovsk, in 2010 - Dnipropetrovsk professional lyceum train and got the speciality "Explorer carriage, ticket clerk." After the lyceum he was employed to separate structural unit “Dnipropetrovsk passenger wagon depot” State Enterprise "Dnieper railway."

In June 14, 2014 around 1:00 am, military transport aircraft IL-76 MD Air Forces of Ukraine, during the approach to the airfield Lugansk city, was hit by terrorists of portable anti-aircraft missile system. The plane had 40 soldiers of the 25 th separate Dnepropetrovsk Airborne Brigade, including soldier Korenchenko and 9 crew members. As a result of the disaster, the entire personnel of troops and aircrew were killed.

In October 28, 2014 in Dnepropetrovsk (now - Dnipro) on memory ceiling of killed workers of Dnipropetrovsk passenger wagon depot (Prospect Sergey Nigoyan, 42b), where Oleg Korenchenko worked, the memorial plaque was established.