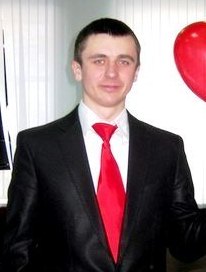 Kotvits‘kyy Volodymyr Viktorovych was the senior gunner of the separate 26th artillery brigade of the Land Forces of the Armed Forces of Ukraine, the senior soldier.

He was born on 20 July, 1994 in the village Poliyanivka, Novograd-Volyn district, Zhytomyr region. In 2011 he graduated the secondary school in 2012 - Zhytomyr professional college of Food Technology and received the profession "Computer Operator, controller-teller." From 2012 he studied by correspondence study in the Vinnitsa technical college.

In the spring of 2013 he was called up for military service in the Armed Forces of Ukraine. Military service was held in a separate 26th artillery brigade of the Land Force of Ukraine (military unit A3091 city Berdichev Zhytomyr region).

On 13 May, 2014 the senior soldier Kotvitskyy died in a fire and explosion, which occurred in one of the self-propelled guns when moving the unit from one position to another during exercises that were not designed to strengthen the protection of the southern section of the state border of Ukraine, near the village of Rivne Genichesk district, Kherson region.

He was buried in the cemetery of the village Vyroby, Novograd-Volyn district, Zhytomyr region.

He was awarded the departmental honors from the Ministry of Defense of Ukraine - the badge "Honor" (05.22.2014, posthumously).

The parents and five older brothers are left.