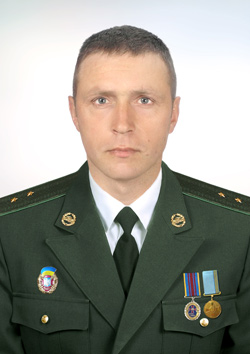 Kolovorotnyy Sergey Volodymyrovych was the instructor of driving tanks 169th Training Centre of the Land Forces of the Armed Forces of Ukraine, Ensign.

He was born on December 12, 1977 in the village Kolisnuki, Nizhyn district, Chernihiv region.

On November 18, 1996 he was drafted the Kiev regional military commissariat for military service.

Since June 2014 he participated in the anti-terrorist operation in eastern Ukraine.

From 27 to 30 August 2014 militant group, which included the ensign Kovorotnyy, kept fighting with Russian regular troops in the Luhansk region.

On August 31, 2014 near the village of urban Novosvitlivka, Krasnodon district, Luhansk region as a result of the shelling of MLRS "Grad" positions on the unit, Sergey Kovorotnyy was killed.

On September 12, 2014 he was buried at the cemetery in Artemivsk district of Shostka, Sumy region.

On February 5, 2015 in Shostka on the facade of the building (Karl Marx, 42), where Kovorotnyy Sergei lived, there was established a memorial plaque.