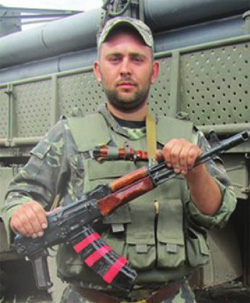 Kutoviy Vadim Borisovich was the driver-mechanic of reactive 27th Artillery Regiment Army of the Armed Forces of Ukraine, Junior Sergeant.

On August 5, 2014 near the town of Debaltsevo Donetsk region, resulting in a night attack, Vadim Kutoviy died.

On August 7, 2014 he was buried at the central cemetery of the town Romney.

On August 7, 2015 in the city of Romney in front of the building of Ostap Vushniya secondary school №4 (Pushkin Str, 4), where Vadim Corner, a memorial plaque was established to him.