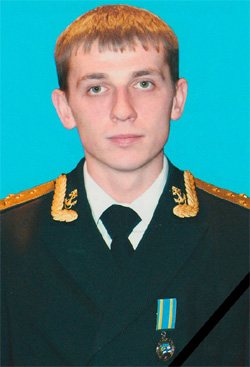 Labutkin Dmytro Vitaliyovych was the deputy editor of the television and radio company of the Ministry of Defense of Ukraine "Breeze" of the Naval Forces of the Armed Forces of Ukraine, captain of the 3rd rank (posthumously).

Since 2009 he has served as editor-in-chief of the TV and Radio Company of the Ministry of Defense of Ukraine "Breeze" of the Naval Forces of the Armed Forces of Ukraine (the city Sevastopol, the Autonomous Republic of Crimea). During his service, Dmytro Labutkin took part in far-off naval campaigns and international military exercises as a military journalist.

In the spring of 2014, after the occupation of the Autonomous Republic of Crimea by the Armed Forces of the Russian Federation, he traveled to the city Odessa.

From 21 January, 2015, he participated in an anti-terrorist operation in eastern Ukraine as a military journalist, where he served as a press officer of the "C" sector.

On 16 February, 2015, a support column, commanded by Captain Butusov, left the Debaltsevo near 11:00 am ambushed near the village of Novotgrygorivka, Artemivsk (now Bakhmutsky),Donetsk region. As a result of the fight, an armored personnel carrier traveled the first. In the middle of this armored carrier was Dmitro Labutkin, who after the battle was considered to be missing. On 20 March, 2015, in Dnipropetrovsk morgue, it was confirmed that one of the bodies of dead Ukrainian servicemen brought from the city of Debaltsevo of the Donetsk region belongs to Dmitri Labutkin.

On 25 March, 2015, he was buried in the cemetery of the Belokrynya village, Kremenets district.