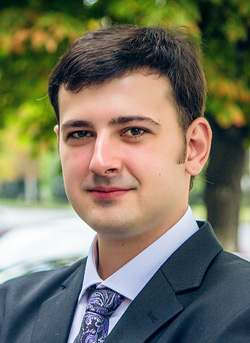 He was born in February 5, 1988 in the city of Tokmak, Zaporizhya region. In 2005 he graduated the secondary school №5 city of Tokmak, 2010 - Department of Political Science Faculty of Social Sciences and International Relations Oles Honchar Dnipropetrovsk National University.

In 2013 he graduated the graduate school Oles Honchar Dnipropetrovsk National University and continued to work as an assistant at the Department of Political Science.

In March 2014 he voluntarily came to the October District Military Commissariat of Dnepropetrovsk (now - Dnipro), where he was mobilized into the Armed Forces of Ukraine. He served in the 25 th Dnepropetrovsk separate airborne brigade of highly mobile airborne troops of the Armed Forces of Ukraine (military unit A1126; urban village Hvardieske, Novomoskovsk district, Dniepro region).

In June 5, 2014 he defended his thesis for the degree of candidate of science on "growth coalition as a subject of power relations in the urban political regimes."

In June 14, 2014 around 1:00 am, military transport aircraft IL-76 MD Air Forces of Ukraine, during the approach to the airfield Lugansk city, was hit by terrorists of portable anti-aircraft missile system. The plane had 40 soldiers of the 25 th Dnepropetrovsk separate airborne Brigade, including soldier Levchuk and 9 crew members. As a result of the disaster, the entire personnel of troops and aircrew were killed.