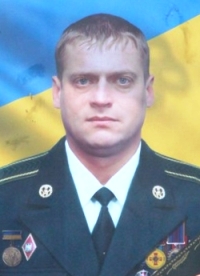 He was born in September 14, 1977 in Shepetovka, Khmelnitsky region. In 1994 he graduated the secondary school №3 City Shepetovka, and after - the Odessa Institute of Land Forces (2013 - Odessa Military Academy). Military service was held in the 24th Iron behalf of Prince Daniel Galician Detached Mechanized Brigade of the Land Forces of the Armed Forces of Ukraine (military unit A0998, sycamore city Lviv region). In the spring of 2014 he took part in the anti-terrorist operation in eastern Ukraine.

In June 19, 2014 near the village of urban Yampol and villages Zakitne Krasnolymanska Donetsk region during a combat mission, during which it was necessary to push deeper into the territories temporarily controlled by militants znyschity strengthen and release the settlements, military 24th separate mechanized brigade entered into battle with the Russian-terrorist groups. As a result, about 30 combat soldiers received injuries of varying severity and 7 soldiers were killed, among them Lieutenant Colonel Lyashenko was.

In July 31, 2014 during the 56th session of Shepetivka City Council decided to rename the street from Chernyshevsky to Igor Lyashenko.

In June 12, 2015 in Shepetovka in front of the building of secondary school №3 ( Sudylkivska Str., 19), where Igor Lyashenko studied, the memorial plaque was established.

He was awarded the Order of Bohdan Khmelnytsky degree (21.8.2014, posthumously).