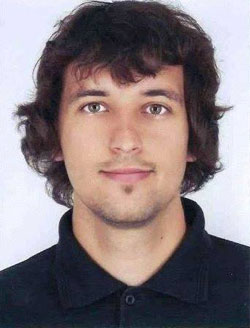 Matushchak Yuriy Vitaliyovych was the founder and the chairman of Donetsk regional youth organization " Poshtovh" , the social activist, the policeman of the battalion of special police patrol " Dnipro - 1 " of Main Directorate of the Ministry of Internal Affairs of Ukraine in Dnipropetrovsk region, the ordinary policeman.

He was born on 15 February, 1987 in Donetsk. In 2004 he graduated the secondary school in Donetsk and entered the Faculty of History of Donetsk National University.

On 31 October, 2006 Matushchak Yuriy , being the third year student with the co-thinkers created Donetsk regional youth organization " Poshtovh" , whose aim is to promote Ukrainian national revival in Donetsk region. Matushchak Yuriy was elected as the chairman of the organization. The representatives of the organization promulgated Ukrainian language and culture, contributed to the study of " white spots" of history, released their own newspaper, carried out various activities and events such as literary evenings , festivals, Christmas cribs , commemorating the victims of the Holodomor and Stalinist repression, and - a wedding Ukrainian style.

In 2009 he graduated the Faculty of History of Donetsk National University.

In 2011 - 2012 years he passed internship in Lublin (Poland), where he participated in a project to restore the memory of the tragedy in Volyn, 1943, collecting eyewitness accounts of those events.

In 2012 he returned to Ukraine. He worked as a school teacher of history.

Since the beginning of the Revolution of dignity, which began on 21 November 2013 and lasted until February 2014, George became one of the organizers of Donetsk euromaidan. He also participated in the creation of self-defense in Donetsk for the safety of participants pro-Ukrainian actions. During these events, a history teacher - Matushchak Yuriy was dismissed from school, because he believed that his place is "on the barricades". Till the end he struggled for his views , even if in Donetsk there has already started the notorious events of " Russian Spring". But when the Russian-armed terrorist groups appeared in the city and began to threaten openly towards pro-Ukrainian citizens , Yuriy realized that to stay there is dangerous for life.

In June 2014 Yuriy with his girlfriend, who is a citizen of Italy, Francesco Leonardi, were forced to save for their own lives to leave Donetsk and move to the city of Chernivtsi. But George could not stand by the events that took place in his native Donetsk region, and then he went to Kiev (now - Dnepr) and was enlisted in the ranks of the battalion patrol special police "Dnepr-1" Main Directorate of the Interior Ministry of Ukraine Dnipropetrovsk region. While serving in the battalion "Dnepr-1" call sign was "Viter".

On 29 August, 2014 the ordinary soldier of police Matushchak was killed, leaving the Ilovaisk Boiler , so-called "green corridor" on the road between the villages Novokaterynivka and Gorbatenko, Starobeshevo district, Donetsk region. Since that time Yuriy Matushchak was comsidered missing. On 3 September, 2014 the body of soldier Matushchak with the bodies of 96 Ukrainian soldiers , who were killed during the departure of Ilovaisky Boiler was brought to the morgue of Dnepropetrovsk (now - Dnipro). On 16 October, 2014 he was buried in the Krasnopilskiy cemetery of Dnepropetrovsk (now - Dnipro) as " Temporarily-known defender of Ukraine". Only 9 months after the battle the body of Yuriy Matushchak was identified through the DNA examination.

On 21 April, 2016 in Vinnytsia in the hall of the main building of Donetsk National University (600richya Street, 21), where Yuriy Matushchak studied , the memorial plaque was established.