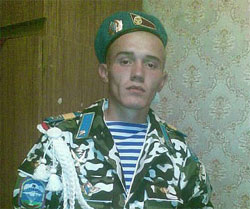 He was born on 6 December, 1989 in the village Novopetrivka Magdalinovskiy district, Dnipropetrovsk region. He graduated the high school.

He served as commander of the combat vehicle - division commander of the 25th separate Airborne Brigade highly mobile airborne troops of the Armed Forces of Ukraine (A1126, towns Hvardieske, Novomoskovsk rayon).

In the night of 4 on July 5, 2014, Mendel was a sergeant at the checkpoint near the town of Slavyansk, Donetsk region, which tried to break through a column of separatist vehicles. He took part in repelling terrorist attacks from a position, which was in the landing.He was killed by shrapnel of the shell from the separatist tank, saving companion, which body he covered .

He was buried in the cemetery of the village Novopetrivka, Magdalinovskiy district, Dnipropetrovsk region.

On 5 July , 2015 on the place where Sergeant Mendel died, the memorial plaque was opened.

The parents, brother and sister are left.