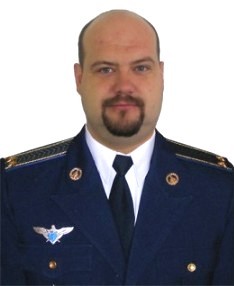 On June 6, 2014 reconnaissance aircraft AN-30B, directed by KV Graves, photographed area of the city Slavyansk Donetsk region. As crew consisted of seven people. At 17:04 at an altitude of 4050 meters, which is considered to be safe, summed aircraft missile, released separatists of portable antiaircraft-missile complex. Strike missiles hit the right engine. He struck through, the fire started. With the fire engine turned over on the right wing. AN-30B began to lose the altitude rapidly. By the fall it remained a matter of seconds. The commander ordered the team to leave the plane, and he took it from neighborhoods Slaviansk and fell to the north of the city at an angle of 80 degrees. Captain Lieutenant Colonel Konstantin Mogulko died. He was found in the cockpit. He remained to the last moment at the helm and did not try to get out of the plane, which is not a system bailout, and he could only use the back door.

According to President of Ukraine Decree №545 / 2014 of 20 June 2014 for the exceptional courage and heroism, the spirit of invincibility in the struggle for an independent Ukrainian state, military loyalty oath colonel Konstantin Viktorovich grave posthumously awarded the title Hero of Ukraine with the Order "Golden Star".

On September 17, 2014 in Vinnytsia on the facade of the building of secondary school №23 (Cosmonauts Prospect, 32), where the hero studied, the memorial plaque was established.

In December 2014 the Day of the Armed Forces of Ukraine Ukrposhta and the Ministry of Defense and the National Guard of Ukraine, launched a series of art marked envelopes titled "Glory to the Heroes!". On one of the envelopes Hero of Ukraine, Colonel Konstantin Mogulko was depicted.

On August 25, 2015 according to the decree of the President of Ukraine, the aircraft AN-30B (board №86) 15th Brigade transport aircraft of the Air Forces of Ukraine, was named after Hero of Ukraine Konstantin Mogulko.


KILLED IN BATTLE:
June 6, 2014. The accident aircraft AN-30B near the town of Slavyansk Donetsk region