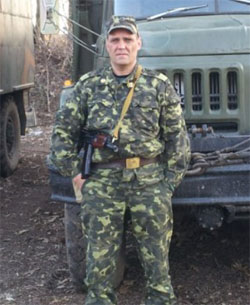 Moiseyenko Volodymyr Mykolayovych was the driver of company logistics 1st separate Guards Tank Brigade of the Land Forces of the Armed Forces of Ukraine, Sgt.

He was born on 28 January, 1974 in Angarsk, Irkutsk region (Russia). At early age he had lost their parents. He studied at the boarding city Shelekhov, Irkutsk region (Russia). Teenager was adopted. However, adoptive parents moved to the village Irzhavets , Ichniansky district , Chernihiv region. He studied at the secondary school of the village Irzhavets. Subsequently, foster parents left him to fend for themselves, the countrymen was involved into his upbringing.

After demobilization he returned to the village Irzhavets. He worked at a railway crossing Huzhivka (village Huzhivka, Ichniansky district, Chernihiv region), then - guard.

Since 2014 he participated in the anti-terrorist operation in eastern Ukraine.

On 30 July, 2014 near the village Shishkiv, Slavyanoserbsk district, Luhansk region when performing tasks on the delivery of ammunition and food to the checkpoint, the car, where sergeant V.M.Moiseyenko was , was blasted by hitting the mine. Munitions were detonated because of the explosion , which were transported in the car. The explosion killed Sergeant Major S.P.Derkach and V.M.Moiseyenko.

On 2 August , 2014 he was buried in the cemetery of the village Irzhavets, Ichniansky district Chernihiv region.

On 5 March , 2015 in the village Irzhavets, in the lobby of secondary school and on 11 September 2015 in front of the building of the State vocational education institution "Ichnyansky professional agrarian lyceum" (street May, 2), where Moiseyenko Volodymyr Mykolayovych studied, the memorial board was opened. In the study subject "homeland security" of Ichniansky professional agrarian lyceum, in honor of the Hero, the booth of memory was decorated.

The wife and three children were left.