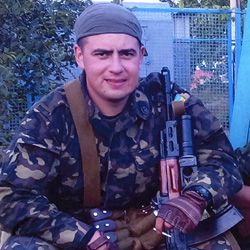 Moskalenko Anton Yakovych was the senior shooter of 9th Vinnytsia territorial defense battalion of the Armed Forces of Ukraine, the senior soldier.

He was born on 19 January, 1991 in Zhmerynka, Vinnytsia region. In 2006 he graduated 9 classes of secondary school №3 of Zhmerynka and entered Zhmerynka Higher School. Then he continued his studies at Vinnytsia college transport on the speciality "Exploitation and repair materials handling and construction vehicles and equipment." He studied in classes at Vinnytsia Institute of Economics and Social Sciences of the University "Ukraine" speciality "Jurisprudence".

From 2010 to 2011 he passed the military service in the Armed Forces of Ukraine.

Since June 2014 he took part in anti-terrorist operation in eastern Ukraine.

On 21 August, 2014 senior soldierMoskalenko was killed in shelling the Russian-terrorist groups on the Ukrainian military checkpoint near Novoazovsk, Donetsk region.

On 24 August, 2014 he was buried in the city cemetery of Zhmerynka.

On 19 January 19, 2015 in Zhmerynka in front of the building of secondary school №3 (February lane 3), where Anton Moskalenko studied , the memorial plaque was established . The city Zhmerynka on the facade of the building Jmerinka locomotive depot, where Anton Moskalenko worked, the memorial plaque was established.

The parents and younger brother are left.