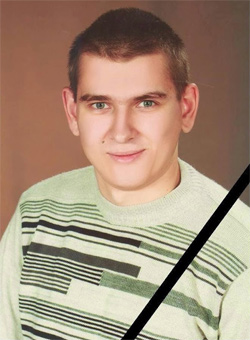 He was born on 8 March , 1994 in Khmilnyk, Vinnytsia region. In 2010 he graduated the secondary school №1 of Khmilnyk, 2013 - Vinnytsia Transport College, specialty "Organization and fire protection equipment" and qualification of equipment rescue operations.

Since April 2013 he had military service under contract to the 8th separate special purpose regiment Special Forces of the Armed Forces of Ukraine (military unit A0553, the city Khmelnitsky).

Since June 2014 he took part in anti-terrorist operation in eastern Ukraine.

On 23 July 2014 he was buried in the city cemetery on the street Porik in Khmilnyk.

In the city Khmilnyk in front of the building of secondary school №1 (Heavenly Hundreds of street, 62), where Muravs‘kyy Serhiy studied , the memorial plaque was established.

Based on the order of Minister of Defense of Ukraine of 29 January 2016, senior soldier Muravs‘kyy Serhiy was forever enrolled in the registered lists 8th special purpose company of the 3rd special unit of the 8th Regiment separate special purpose.