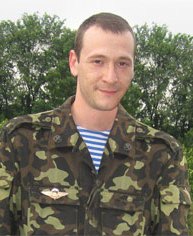 He was born on October 24, 1988 in Lviv. In 2004 he graduated 9 classes of secondary school №100 Lviv, and in 2007 - Lviv vocational school (now - Lviv Higher Vocational School of Technology and service), and received the profession "Cook-confectioner."

He passed the military service in the Armed Forces of Ukraine. He served in the 80th separate airborne regiment highly mobile airborne troops (from 2015 - 80 and separate Landing and Assault Brigade, a military unit A0284 city Lviv).

He worked in various areas of the city of Lviv.

On July 11, 2014 near the village Zelenopillya Sverdlovsk district, Luhansk region around 4:30 am n-terrorist groups fired from the MLRS "Grad" to the checkpoint of Ukrainian military shelling killed 19 soldiers, among them Yuri Nagorny was.

On October 13, 2015 in Lviv on the facade of the building of secondary school №100 (street Velichkovsky, 58), where Yuri Nagorny studied, a memorial plaque was established to him.

On November 28, 2015 he was buried on the honorary burial №76 Lychakiv cemetery Lviv.