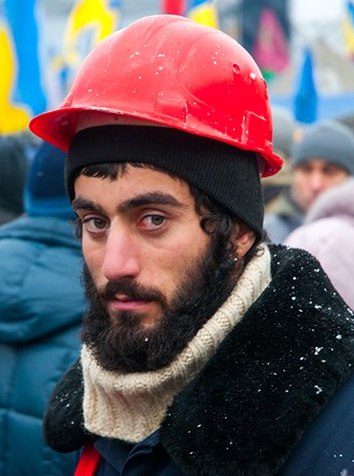 He was born on 2 August, 1993 in the village of Bereznavatovka, Solonyansky District, Dnipropetrovsk Region. He was Armenian His family moved to Illinois to live in the village Navur (now - Marz (Region) Tavush, Armenia), on the border with Azerbaijan to escape the war in Nagorno-Karabakh.

He actively engaged in karate. In 2012, he won the third place in the championship of the city of Dneprodzerzhinsk (now Kamyansk) with Kyokushin Karate.

From December 8, 2013, he was on the Independence Square in Kyiv, where he was an active participant in the Revolution of Dignity. At EuroMaydan, he came on his own initiative without firstly informing his parents. He was a guard at Maydan, he lived in tents with the protesters from Lviv and Ivano-Frankivsk regions, as well as at the House of Trade Unions. He arrived home early in January 2014, however, despite the family‘s conviction, decided to return to the Maydan.

On 22 January, 2014 at around six o‘clock Nihoyan Serhiy died from the gunshot wounds lead buckshot in the neck, head and chest near the stadium "Dynamo" in the Grushevskiy street, Kiev.

On 26 January, 2014, he was buried in the cemetery of the village Bereznavatovka, Solonyansky district, Dnipropetrovsk region.

According to Decree of the President of Ukraine №890 / 2014 of 21 November 2014 in the civic courage, patriotism, heroic defending constitutional principles of democracy, human rights and freedoms, dedication Ukrainian people identified during the Revolution of dignity Nihoyan Serhiy Hahikovych was posthumously awarded the title Hero of Ukraine, Order "Golden Star".

On 21 April, 2014 in the village Bereznuvativka on the building of secondary school (street Proletarian, 26), where Nihoyan Serhiy studied, the memorial plaque was established. The name and portrait of the Hero are stamped at the Heroes of Heavenly Hundred Memorial in Kyiv on Institutska Street.