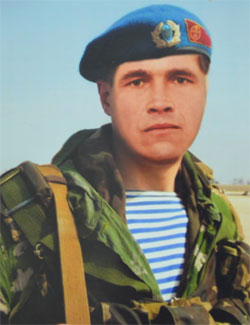 Obolyentsev Viktor Mykolayovych was the number of service of 79th separate airborne brigade of highly mobile airborne troops of the Armed Forces of Ukraine, Junior sergeant.

He was born on 27 June, 1971 in the village Znamenskye, Black Sea region Crimean region (now - ARC). He graduated the high school in the Crimea and vocational school specialty "Electricity" in the Luhansk region.

He passed the military service in the Armed Forces of the USSR.

He worked as an electrician at the mine in Yenakiyevo, Donetsk region. In 1995, together with the family he moved to the village Dovbyshi, Chudnovskiy district, Zhytomyr region. He worked at a local agricultural enterprise.

On 24 November, 2014 near the village Peski, Yasinovatskiy district, Donetsk region in the dugout, where Junior Sergeant Obolyentsev was, hit a rocket. From received wounds soldier died.

On 6 November 2014 he was buried in the cemetery of the village Dovbyshi, Chudnovsky district, Zhytomyr region.

The mother and the sister are left.

In September 2015, near the village Dovbyshi beside the Cross devoted to the fallen soldiers of World War II for Obolyentsev Viktor there was opened the memorial sign.